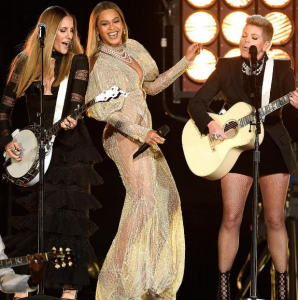 In true 2016 fashion the angry mob took to Twitter to trash both Bey and the CMAs for allowing such a thing to go down:

Really @CountryMusic ? Beyonce at the #CMAawards50 Aside from that trash, much better show than last year

#Boycott @CMA since it wants to have a cop hater like @Beyonce on our country music show. She’s not ruining our music.

@cmtcody @Beyonce when did we run out of country singers!!!!!! So fed up with country artists being snubbed don’t want this crossover crap

Beyoncé is not a country artist therefore she doesn’t belong at the CMAs..it has nothing to do with her skin color

#Beyonce and the #DIxieChicks brought down the house at the #CMAawards50 tonight! ? What did you think of their epic collaboration? Click the link in our bio for the full scoop! ?: Image Group LA/ABC via Getty Images #CMAs

A photo posted by Entertainment Weekly (@entertainmentweekly) on Nov 2, 2016 at 8:48pm PDT