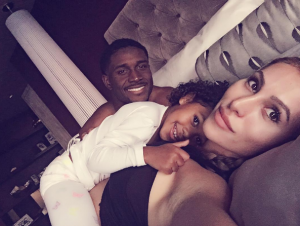 Monique Exposito is claiming that she is six months pregnant with the NFL star Reggie Bush‘s baby.

Reggie allegedly gave the married cocktail waitress $3 MILLION dollars in hush money and to get an abortion.

However, she has reportedly decided to go through with the pregnancy and even plans to celebrate with a baby shower in Miami next month.

Reggie who once dated Kim Kardashian, is married and has two children with his wife.

A woman named #MoniqueExposito is alleging that she is pregnant by NFL’er #ReggieBush. Rumor has it, the woman is actually married and in the past, was another professional athlete’s mistress for years. Reportedly, Reggie gave #millions to Monique in exchange for her silence and for her to #abort her #baby. However, the cocktail waitress is now six months along and appears to be going through with the pregnancy anyway, and will celebrate her new arrival with a baby shower in Miami next month.