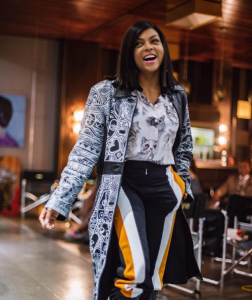 Taraji P. Henson just stepped up her living situation by moving to Hollywood Hills where she just dropped $6.4 million for a secluded home.

The crib which sits on top a hill has 3 bedroom, 3 bath, a pool with a waterfall, and there’s a totally zen meditation deck overlooking the city.

Taraji still owns another home in the less bougie Glendale neighborhood, which she leases.