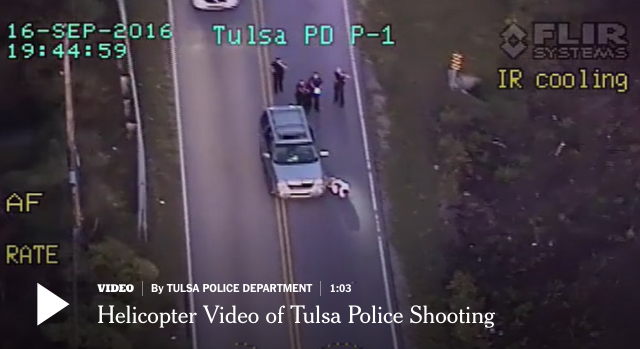 On Monday the Police Department in Tulsa, Okla., released video on Monday of an encounter during which, the authorities said, a white police officer fatally shot Mr. Terrence Crutcher, an unarmed black man, who could be seen raising his hands above his head.

During the encounter, which took place around 7:40 p.m. Friday, the 40-year-old man, was shot once and killed by Betty Shelby, a Tulsa police officer, after the police received reports of an abandoned vehicle blocking a road, the department said.

Video recorded by a police helicopter and a patrol car’s dashboard camera shows Mr. Crutcher raising his hands, walking toward a car and leaning against it. He was then Tasered by one officer, Tyler Turnbough, and fatally shot by Officer Shelby, the department said, though the view from both cameras is obstructed in the moments before those actions.