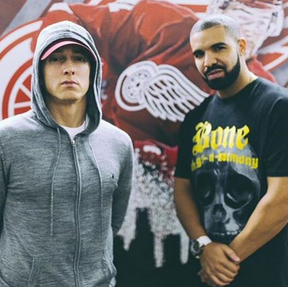 Remember the rumor that recently went around that Eminem had a diss track on the way for Drake? Well scratch them plans.

Last night at Joe Louis Arena in Detroit, Drake and Em killed the stage TOGETHER after Slim Shade rose through a trap door in the stage and joined Drake to perform ‘Forever.’

“Make some noise for the greatest rapper to ever get on a microphone he goes by the name of Eminem,” said Drake after bowing to Eminem, who gave props back by saying, “It’s an honor to share the stage with this man right here.”

Check out some clips of the EPIC moment:

How they feel about you where you from? #SHADY https://t.co/z970ChvY0Q pic.twitter.com/3js8GBxDek